The Adventures of Milo and Oatmeal Stouts | The Denver Adventure Blog

The Adventures of Milo and Oatmeal Stouts

A hot-button issue here in Denver concerns man’s favorite four-legged friends and the beloved breweries of the front range. Last year, the city’s Department of Environmental Health deemed our furry companions unsuitable to accompany us for a beer at our favorite watering holes—even if they were restricted to the patio.

That’s right: if you’re planning on going out for a pint at Left Hand, Black Sky, or Baere Brewing, you’re not allowed to bring your pet mole-rat. 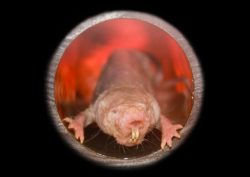 his is my pet—nay, my best friend—Bitey the mole-rat. He’s been my constant companion while sampling ale at the latest up-and-coming brewery. Typically I’d take a seat on the patio and let the little fella scamper about on the table, causing the children and women to shriek with delight. He even accompanied me on a brewery tour once, where our guide was so overwhelmed with Bitey’s cuteness that she passed out right onto the canning equipment.

Imagine my dismay when I brought Bitey along for one of my regular outings only to be told that he wasn’t welcome, that he’d have to go. If I wanted to sample [redacted]’s new oatmeal stout, I’d have to do so without the company of my naked mole-rat friend.

I’m far from the only person outraged by this mole-rat discrimination. Hundreds of Coloradans have taken to the internet to complain about the health department’s recent crackdown on mole-rats in breweries:

“We’d take Rocky down to Prost and sit out on the patio all the time, but now the city’s putting their foot down, even with little Chihuahuas.” –Sandra D., RiNo

“Spot is a good boy. He sits underneath the table, chews on his bone, and doesn’t bother anyone while they’re drinking beer. But Denver doesn’t care.” –Rusty S., Wash Park

This writer isn’t sure why a naked mole-rat would be chewing on a bone, nor why Sandra D. from RiNo randomly brings Chihuahuas into the conversation, but these are just a few of the passionate naked mole-rat owners affected the city’s narrow-minded views.

Keep up your outrage, my fellow drinkers. Let us be vocal and demonstrate to the Denver Health Department that the city’s breweries embrace the company of us mole-rat owners. First we must win back our breweries, then it’s onward to mole-rat acceptance in our grocery stores and our fine dining establishments.

About the author: Jason U. enjoys cracking cold ones and dipping while doing...well, pretty much anything. It is rumored that Jason was born inside of a half full barrel of moonshine because his mother wanted to give a water birth. Jason very rarely wears shirts, but instead counts the one working strap on his overalls as a legitimate replacement. When in trouble at the trailer park, you will find Jason living out of his pickup-truck. "Spittoon? Ain't that what we got the earth for?"